In the spring of 1988, a woman named Dee Fletcher collapsed into a coma from carbon monoxide poisoning. She awoke in the hospital some time later, having been saved by her partner who arrived home just in time. But when she awoke, she was unable to see.

The doctors diagnosed her with cortical blindness, suggesting that her brain’s primary visual center had been damaged. However, over the next few days, Dee started to see some things–flashes of red and green in the flowers beside her bed, of blue and white in the sky outside.

Dee’s mother flew in to visit her in the hospital. She was certainly in for a shock when one day, as they talked together over coffee, Dee said something quite extraordinary.

“You know what’s peculiar, Mum? I can see the tiny hairs on the back of your hand quite clearly!”

Mrs. Fletcher, full of hope that her daughter would make a full recovery, was soon saddened to find that, despite recognizing these details of her hand, Dee was entirely unable to make out the shape of her hand. In fact, she could not make out any shapes at all; she could only marginally distinguish objects with a distinctive color or texture.

As the days and weeks passed, it was obvious that Dee’s vision was not improving beyond this state. At this point, she was sent to a pair of cognitive neuroscientists, Melvyn Goodale and David Milner, in the hope that they might be able to help her.

Through some initial tests, Goodale and Milner learned a few things about her condition. Even though she could not distinguish objects based on shape, she could indeed see their color and surface detail and identify their material. She could detect a patch of fine lines, but counterintuitively, she was completely unable to tell if the lines were horizontal or vertical. She could detect colors, but saw no edges or boundaries to those colors; a fork and knife would appear to her as a single blob of color.

Despite all this, only Dee’s vision appeared to be affected by the asphyxia. Her memory, speech and senses of hearing and touch were unimpaired. But the most curious aspect of her behaviour was that she seemed to have no motor disabilities–even though she had so much trouble seeing, she had no problems walking or picking up objects with her hands.

During one of the testing sessions, the scientists held up a pencil to see if she could recognize it. Predictably, she could not, and in line with previous experiments, she could not even tell if it was held vertically or horizontally. But then, something remarkable happened–with a perfectly coordinated movement, she suddenly reached out and took the pencil from the examiner’s hand. 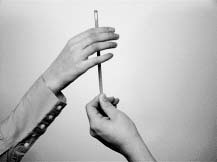 Goodale and Milner, following their initial shock, took the pencil back and asked her to do it again. Each time they did this, she had no trouble grabbing it; it didn’t matter where they held it, or if they held it horizontally or vertically. Yet at the same time, she could not tell them anything about its position or orientation. Her hand had no trouble locating the pencil that her eyes could not see.

The scientists soon started to notice more and more incidents where there was a stark contrast between what she could perceive and what she could do. After one morning of frustrating tests at Dee’s home in Italy–she still could not recognize a single face, pattern, or drawing shown to her–her partner suggested that they go for a picnic in the Italian Alps to lighten the atmosphere. Following a short drive, the group had to walk half a mile through a dense forest to reach the picnic site. Yet Dee had no issues walking on the uneven path. She did not hesitate, stumble, or walk into any branches that hung over the path. And when they reached the picnic site, she was equally adept at grabbing things that were passed to her.

Goodale and Milner were set on determining the extent of her abilities. In a more formal experiment, Dee was able to consistently “post” a card through a narrow slot, regardless of its orientation. But when asked to simply rotate the card in her hand to match the orientation of the slot (without sliding it through), she was completely unable to do it.

In another experiment, she was shown numerous–colorless–objects of various shapes and sizes. Despite not being able to describe the width or position of the objects, she picked up every object with ease, accurately scaling her finger-thumb distance to the correct size based on the object’s size and orientation.

Previous animal research had shown that the eye sends information simultaneously along different pathways to different brain areas. Gooddale and Milner knew this, but this was their first time witnessing it in a human, and the existence of different pathways was made only more clear by the fact that, other than her vision impairment, Dee’s brain appeared to be fully functioning. A scan of her brain activity confirmed the hypothesis: normal activity was seen in an area of the brain responsible for coordinating movement, but damage was evident in the area responsible for recognizing objects.

Rather than having one unified system of vision, scientists now believe there are two channels through which vision information is processed. A visual perception track allows us to build up our intuitions about the physical nature of the world, and a visual action track coordinates our physical motion so that we may interact with the things we see.

In people with unimpaired vision, this effect can be demonstrated by the “hollow face illusion”. Even though people may perceive the face as protruding rather than the hollowed-out shape that it is, they would accurately reach into the inverted face to touch a spot on it. That is, they would not hesitate nor attempt to touch the illusion of the protruding face that they see. Just like Dee, one’s hand acts based on information that the consciousness does not realize.

Stepping back from the topic of vision, the brain often acts in ways that divide its work into multiple “paths”, not all of which are conscious. On one hand, unconscious parallel processing allows us to perform routine actions without a great deal of focus, such as brushing our teeth or recognizing faces. Serial conscious processing, on the other hand, is slower than parallel processing, and requires us to concentrate on one task at a time - but this system is better for problem solving than unconscious processing.

Some people strongly (and understandably) believe that their actions are deliberate and driven by their intentions. But as the experiments illustrate, this is not always the case–our actions are often controlled through mental pathways that never cross through our consciousness.

This is the two-track nature of the mind.

Next story: Looking Without Seeing

Goodale, Melvyn A., and A. David Milner. Sight Unseen: An Exploration of Conscious and Unconscious Vision. Oxford University Press, 2004.